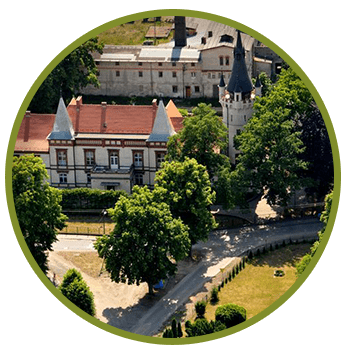 Łagów, also known as the Pear of the Lubusz Land, is a picturesque village with its own microclimate, situated amidst forests and lakes in Lubuskie Province. Formerly a town and now a village, Łagów is a holiday location that offers unforgettable leisure by the lake. There are numerous holiday parks and campsites in the village stretching by the quiet lake. Situated in the core of Lubuskie Province, Łagów lies on an isthmus between two clear lakes of the Lubusz Land, namely, Łagów Lake and Ciecz Lake (Trześniowskie Lake), surrounded by gorgeous beech stands. It is even more special due to being situated in Natura Park 2000 area. Holidays by Łagów Lake are chosen by those seeking rest in the heart of nature, who value the peaceful and quiet ambiance of the surrounding forest.

Łagów abounds in tourist attractions. There are several intriguing historical monuments, primarily the massive Castle of the Order of St. John, which towers above the buildings of Łagów. There are two 15th-century Gothic gates nearby the castle. The place is loved not only by history enthusiasts. In the vicinity of the village, one can find a fortification system of the Międzyrzecz Fortification Region (Międzyrzecki Rejon Umocniony, MRU in Polish or Festungsfront Oder-Warthe-Bogen in German). The underground corridors that conceal numerous mysteries of the past are home to karstic phenomena and bats

Łagów is a charming village that turns into a great stage in summer. Numerous cultural events are held there, the best known of which are Lubuskie Lato Filmowe (Lubuskie Film Summer) and outdoor painting workshops. An event famous throughout Poland is the motorcycle rally in early July, which has been organised for the past several years. For a few days, Łagów is besieged by bikers. The event enjoys huge popularity. Accommodation in Łagów for that period is already booked in winter. Like the entire Lubusz Land, the surroundings of Łagów are one of the most forested regions in Poland. There are numerous fauna species. The nearby forests are home to wild boars, red deers and roe deers, as well as foxes, badgers, martens and squirrels. 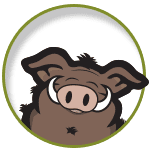 Each year, Łagów is visited by lots of visitors, which is also due to well-developed accommodation facilities. The vast number of campsites and holiday parks with full sports infrastructure attracts both families with children, the elderly and large groups seeking interesting locations for relaxation. The beauty of the local landscape, the hills, the abundance of lakes and large forest stands invite visitors to explore Łagów. Chalets, campsites, tent sites and holiday parks offer numerous amenities. Hiking trails and cycling routes run around Łagów Lake through Zacisze.pl Campsite & Holiday Park, which facilitates the access to the guests and invites them to spend their time actively. Along the shoreline there are sites with outdoor fitness equipment that motivate walkers to engage in exercise. The Ruch w świecie zwierząt (‘Mobility in the World of Animals’) exercise path contributes to the development of various muscles and promotes wellbeing. Visiting villages former run by Templars (Boryszyn, Wielowieś, Templewo) can also prove an interesting experience.